Gino's Soccer Academy is excited to offer a Winter Soccer Camp to finish out the 2021 year!   The half day camp will run December 20th-23rd in Walnut Creek, from 9am-12pm, and is open to players at all levels, 5 to 16 years of age.   The 4-day program will feature different technical developmental elements, along with fun games to goal, each day ending with an appropriate age group scrimmage.
Visit our Camp Offerings or Registration page for more information.  Space will be limited so register today! 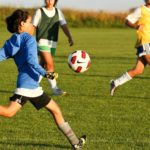 Gino's Soccer Academy is a week-long program for players ages 4 to 17. It is for the advanced as well as the beginning soccer player, individuals and teams.

The camp format is built to accommodate and improve your skill level. Every day we will work on individual ball handling skills including dribbling, passing, receiving/1st touch, heading, shooting/finishing, and multiple moves to help you elude opposing players.

Our emphasis is training you to be a better attacking player by building defensive pressure into our exercises. This will help to improve your touch on the ball and decision-making skills. Every day we will do Rondo’s (possession style soccer) and throughout the week incorporate team concepts such as combination play, switch of play, movement off the ball, 1v1’s, numbers up attacking exercises, along with teaching individual and team defending. We will also train you to play in different positions, and train many attacking concepts.   We also want this to be a fun experience and will incorporate many skill building games that create great energy with the players!   The morning sessions will work primarily on individual player development and small group play. We will build throughout the day with more small-sided games in the afternoon and end the day with a full-sided game.

I was nicknamed ‘Gino’ as a young soccer player and it has stuck with me ever since. In my soccer career I played at all levels including recreational, competitive, high school, college and professional soccer. My experience allows me to identify with players at any level.

My coaching background includes working for eight years as an NCAA Division 1 soccer coach at Saint Mary’s College (SMC) in Moraga, and two years working with the ODP Cal-North State Coaching Program. I have also been a Premier level coach for Lamorinda, Walnut Creek, and Impact Soccer Clubs.  In 2016, 2017 and 2019 I have traveled to Europe to study at professional clubs in Spain, Holland and Germany.  Clubs I have studied at include- Ajax, AZ Alkmaar, Athletic Club Bilbao, Barcelona FC,  Bayer Leverkusen, Espanyol, Schalke 04, and Vitesse.

I have many former players playing NCAA Division 1 college soccer and there is no better feeling than seeing a player achieve their goals and dreams of playing soccer at the highest level. I have worked at soccer camps for the past 30 years and I look forward to sharing my knowledge and experiences in the game of soccer with you.

Thanks for your message! We’ll be in touch soon.